WOW…the last session of Unit 2, the time has gone quickly and because the weather has been dry and not too cold I’ve been able to get out with Solly regularly. It’s really helping to keep our progress moving along nicely. Here is today’s session 😉 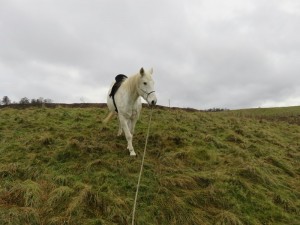 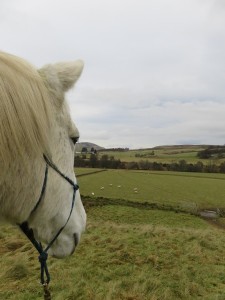 There were some new CZ area’s  pushed today…

…oh golly gosh BUT have visualised this in my head since yesterday and know my strategies and my path SO….off we go. 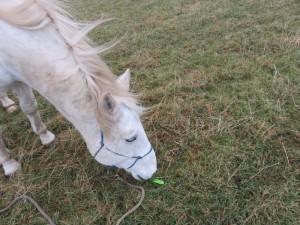 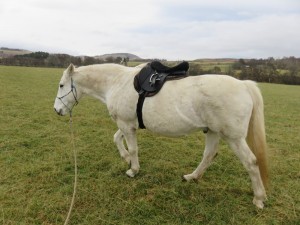 Into the flat lower field okay and walked around the periphery using some circling, cods, half circles on the move and also with Solly just following me or walking along side at a distance.

We even found some ‘rubbish’ that he was brave enough to ‘touch’ and which I put aside to collect later when going home. 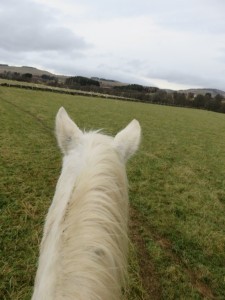 Things went very well so at the gateway I asked Solly to sidle to the gate and I got on. We had a moment where we lost communication and he started going backwards but I just breathed out, sat deeper and asked for forward and all was well.  We worked on the same things as yesterday, approach/retreat to the gate using fig 8’s and making sure each time out from the gate we made the fig 8 circles wider and this time to make them wider we put in a few nice leg yields. This helped prove to me that we were connected, Solly was listening and that I was calm enough to think too.

I was in two mind as to whether to get off and walk back to the horses field but had visualised riding up the hill back to the field so I stayed determined and went over the  bridge (wood/slippery…eek) which went okay and asked Sol to climb the hill. He decided it would be easier to trot (hard ground/slippery…eek) so I said to him out loud, ‘thank you for that but walk is okay here’ and as I breathed out he obliged by going down into walk.

As we got to the t 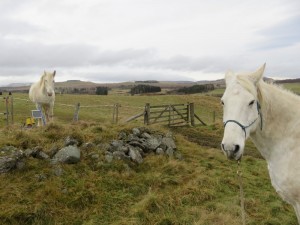 op of the hill we saw Stormy and Tara waiting by the gate for our return and both Solly and I breathed out and relaxed more. We got to the gate and I thought about doing a bit more but in the back of my brain was the niggle that I must always stop on a good note and don’t try ‘just one more’ because often that is when something silly or a breakdown in connection happens….just stop where you visualised and said you were going to stop…SO we did and I dismounted.

I didn’t realised how much this was going to affect me because it’s something we just haven’t done for ages and as I stood and hugged Solly I was shaking through relief of doing it. Trauma is a worrying thing and it felt good later on to know I’d done it but I still need to do it consistently so that it doesn’t affect me like this again, so onwards I continue with our consistency CZT.

I met Shelley when I was getting started with my first horse. I’d previously had ponies as a child handed to me as ‘problem ponies’, but finally after pestering my parents for years I was allowed my own horse. I was already curious and interested in doing things with a more open mind and working with the horse, rather than forcing; this is where Shelley came in! Meeting Shelley was transformational for me. She was the bridge that took me from the ideas and initial information I had, to achieving those goals. I went on to successfully compete in regional, National and International events with my horse. Loading was never an issue, fillers, water trays, ditches, staying over night in strange stables on the show site - you name it. Nothing phased my horse as we had that foundation there already.

Working with Shelley was pivotal to my future career in horses. If you’re in any doubt about working with Shelley, don’t be. It doesn’t matter what discipline you’re in (I was in affiliated British Eventing) you will massively benefit from Shelley’s knowledge and teaching. 100% recommended.

I use your strategies every time I come into contact or handle any horse. It helped me pass my animal handling vet exams 2 weeks ago – it’s just a way that works for every animal. I was on placement last week but yesterday I had time to bring Wally from the field for the first time in 6 months into the school and he did every game perfectly first time. You name it familiarization, draw and drive, stick-to-me, circling, fig of 8’s, liberty and then as I walked to take my jumper off, I turned around to find him standing over a pole with a hind foot at either side of it. Even after all that time, he hadn’t forgotten – in fact he enjoyed being in the school for the first time ever. Was an awesome 20 minutes… Jess (Aberdeeenshire)

I have been a student of Shelley for a few years now and have always found her to be very accessible and willing to give extra help where needed, she is a great teacher and has the ability to grab and keep students’ attention. Shelley always explains things clearly and ensures full participation from her students. Her boundless enthusiasm lights up every lesson and she likes to get to know her students and their horses to make them feel comfortable. She has always taught at a level that is achievable for students using her innovative and inclusive teaching style borne from over 10 years experience. She is always conscious of what motivates me as a student and has the ability to get the best out of both me and my horse. Shelley is a dedicated and professional instructor and it’s my pleasure to have her as my teacher, mentor and best of all my friend. Avril – Perthshire.

I had no idea what to expect from my first lesson with Shelley as I didn’t know anyone that had had lessons with her previously. It was definitely a risk worth taking! She gave me lots of new ideas and really pushed me (in a good way) to improve my horsemanship skills and her sense of humour made my lessons so much fun. My horses and I are all the better for our Shelley lessons and her guidance and advice are second to none. When my foal was born, it was Shelley I immediately turned to to help me as I knew she was the one person I trusted 100% to get it right….and she did. Laura – Fife.

Shelley has a passionate interest in helping people and horses to understand each other. She teaches this vital skill with a patient step by step individual approach which builds confidence, mutual trust and leadership. Her first set of DVDs explain the structure of her course and then she proceeds through the series of skills on the ground and ridden which form the basis of her programme. If you are already familiar with her work it will act as an inspirational aide memoire to keep you on track, if you are new to it there is much to improve your understanding of natural horsemanship. Mary – Aberdeenshire.

I purchased this set of 3 DVDs after having training sessions with Shelley over the summer months in 2015, however they are very easy to follow even if you have not had one to one ‘horsesavvy’ sessions. I have found the techniques invaluable in establishing a better relationship and understanding with my horses. The DVDs are excellent because they are incredibly PRACTICAL. The techniques are things that I now use in every day interaction and handling and have become part of the ‘language’ between me and my horses who are all very different personalities. I am no longer being trampled in a rush for food or walked through by my tank of an alpha mare. We have established mutual respect and boundaries. Those are the basics but so incredibly important and everything else is built from that point. I am now working on lightness and responsiveness in hand and ridden and the DVD’s are a great resource to keep me on track with simple, well explained examples which have now become my horsey bible. Kathryn – Dunkeld.

Shelley has been a valuable part of my horsemanship journey for several years now. I found her when I was “lost” in other horsemanship systems and she patiently guided my horses and I to our true potential with only one lesson a year – oh how I wish I lived nearer! Her straightforward way of teaching and her amazing patience and ability to keep you focussed when you think your brain won’t take in any more information have turned me into a more sympathetic and confident rider on a horse who seems to trust me implicitly I never dreamed I could ride my 17hh showjumper without a bridle on but I can with Shelley’s help!! Elaine – Dumfries & Galloway.

Shelley has been a great mentor for me and my horse over the last 4 years from starting out on groundwork online to refining our liberty skills. She explains things clearly and is very patient! Shelley has helped me immensely and I am very grateful for all her help. Libby – Edinburgh.

Shelley is a very empathetic and encouraging teacher who builds confidence in both you and your horse. You will find yourself moving towards and achieving your goals under her instruction. Mary – Edinburgh.