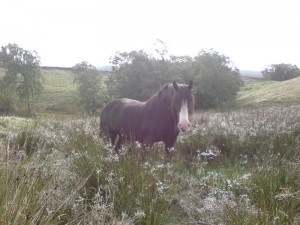 When I first started my journey into Natural Horsemanship my horse Tara and I had quite a good relationship, getting into the journey more and allowing my horse to have a ‘say’ about things that we did together brought around a turn of events that really foxed me and I didn’t know what to do. She decided that she really didn’t want to be around me (or any human really) and giving her the freedom to choose to run off whenever I asked her to be with me was a hard decision. I can understand why many people start Natural Horsemanship with this same intent only to be foxed like this and going back to their normal routine with the thought that NH had ruined their horse BUT I decided to figure out what Tara needed from me so that we could continue our journey and start that partnership that I always wanted.

What I realised pretty quickly was that Tara was quite a shut down horse, quiet, calm, sensitive and did ‘as she was told’ because that’s the way she had been trained. Being such a sensitive soul she showed her ‘compliance’ by being obedient but not willing, by which I mean she did what I asked in a slow, bored way that made me work harder than her and if I really asked too much she went ‘blank’ or would try to run off, especially at liberty where the truth always comes out.

So, after much thought I knew that I needed Tara to catch me in the field not the other way around. She was very good at being caught, standing still and freezing whilst I put the head collar on but if I asked her to catch me she’d run off and that wasn’t the partnership I wanted with my beauty.

I woke up one day and had an idea…’I’m going to mirror her today and try to be with her in her world, show her that I can be there as a herd member and not just with her for training’. This decision helped me to realise that to have a partnership with my horse I needed to request things with a two way conversation rather than demand things and to see if I could gain willingness rather than servitude.

So, I started off in the field about 50’ away from her (she turned her head away if I got any closer and I knew that was her cue for leaving), I started stepping as she stepped, turning when she turned and stopping when she stopped. After a few hours and lots of slow progress I was standing about 5’ away from her, taking each slow step with her as she grazed, putting weight on the back, front or side of my foot like she did as she slowly moved. I turned my head the way she did, lifted it when she did, started to see her muscles move in her legs, her chest move as she breathed.

After another few hours we were very much in harmony, steps, moves, breathing and then about 5 hours into the experiment she stood for about half an hour totally still, almost asleep watching over the other three horses as they lay down to sleep. This part was hardest of all. I moved, brushed flies off me, scratched itches and generally not ‘in the moment’ with her at all. BUT I did start to realise this and managed to really become a sleeping horse with her, it was like meditating. In a HUGE moment she then lay down next to me and I sat down with her for another 15 mins. That moment will always be very special in my life as she showed me that to be in her world, on her time, with her peace she was willing to allow me in and showed me true trust by laying down with me.

Since that moment Tara has always come to catch me but I have to ask her permission to enter her realm every time by squatting down when she looks at me and open my heart to shower her with thoughts of love and when I do that and open my arms to her she comes to me willingly on her terms.

She has taught me patience I never knew I had and the awareness that if I allow things to happen through mutual respect and trust then it will happen, but I have to believe. It’s not just about what I want, it’s about what we want together, as partners.

I also find that when I play the game of ‘Stick 2 Me’ that I can quickly get connected with her, and other horses, physically, mentally and emotionally because of the things I learned from those 6 hours one day on a Scottish hillside.

So, if you ever have the time to dedicate to mirroring your horse and not put a time limit on it then I really believe you and your horse can find deep bond by doing this. I’ve done little bits of this with Tara now and then and have done similar, shorter versions of it with the other members of our herd. It really does help to teach about how a horse moves, watching what they do during a day and reminds me daily that when I play or ride them that I’m doing a lot more with them than they do themselves when left to their own devices in their herd so I try to mirror them a bit and see if they’ll mirror me in the start of our dance together and that then brings about the game I play called ‘Stick 2 Me’ which I will talk about in another article soon. 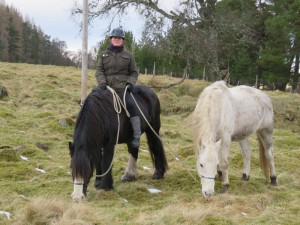 You can also ‘Mirror Your Horse’ when riding. Make sure your horse is calm, remembers you are up on it’s back and not spooky before doing this, start in a small area like a round pen. Allow the horses movement to move your body in harmony with it’s own. Shoulders with shoulders, hips with hips. This task will find you a better seat and balance and allow you to not ‘be in control’ all the time, to allow the horse to have some say in your journey together. Friendship and partnerships are all about both sides having a say so enjoy learning how your horse moves and keep breathing in harmony too. 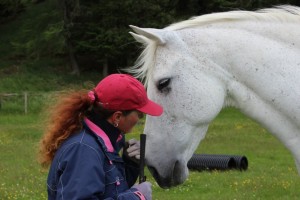 I often get asked why I work so much at liberty with my own horses and my reply is ‘to test our connection’. For me it’s this connection that holds the key to everything I do with horses, all ground work, handling and ultimately riding. But how is this connection created?

For me it is very much a mental (focus) and heart (emotion) connection that is created by being ‘in the moment’ and ‘with the horse’ at all times when in their company. It is also integrated with the ‘energy’ of my body. If I can focus on what I want to achieve with my horse and on what my own body is doing then we can become ‘connected’. SO, everything I do, feel, breath and focus on transfers to my horse. I think positively on what I’m trying to do NOW and allow my body and mind to shape the body and mind of my horse so that we become ‘dance partners’.

Slowly the connection can become deeper and deeper so that my physical/body moves become more invisible but my inner mind/focus becomes stronger and once the horse is invited to partner up they really follow that focussed lead.

It can be hard to achieve if your mind is constantly thinking of other things so the first task you have to try is to empty your mind of other things and just be in the moment with your horse. It’s like a dance where we collectively move together that brings about a mutual understanding of space around us.

A more visual way of thinking about your horse connection can be of how you share space together and I will write more about Sharing Space in another article. 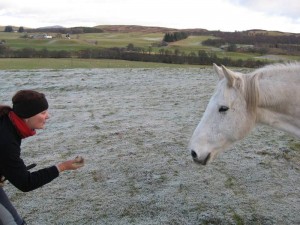